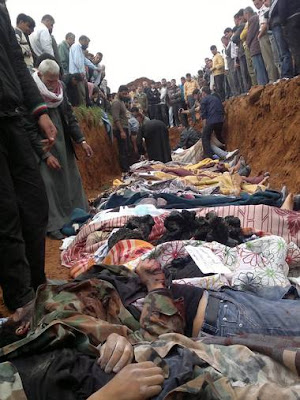 "Syrian government shelling and offensives against rebel-held towns killed at least 74 civilians across the country yesterday, activists said, as the United States posted online satellite images of troop deployments that cast further doubt on whether the regime intends to comply with an internationally sponsored peace plan.

President Bashar al-Assad has accepted a ceasefire deadline brokered by the international envoy Kofi Annan, which calls for the Syrian leader's forces to pull out of towns and cities by Tuesday, and for both government and rebels to lay down their arms by 6am local time on Thursday. But the escalating violence of the past few days – fuelling accusations that Mr Assad is rushing to stamp out as much of the year-old uprising against him as he can before next week's ceasefire – means that thousands of Syrian refugees are streaming across the border into Turkey, with horrific accounts of mass graves, massacres and burned-out homes.

The trigger for the new wave of refugees was an offensive in Idlib province, which borders Turkey and which has become increasingly rebellious. Activists reported about 100 dead in the villages of Taftanaz and Killi in recent days. A photograph provided to Associated Press by a Syrian activist showed at least a dozen corpses wrapped in blankets in what appeared to be a mass grave in Taftanaz. AP could not verify the authenticity of the photograph, but witnesses also described a mass grave.

"They destroyed the whole village," said one refugee, after fleeing Killi, who asked to be identified only as Anas. "If he has to kill, Bashar would even kill a million people. He doesn't care." Hikmet Saban, another Syrian refugee who reached Turkey, described the devastation in Taftanaz, several miles outside the city of Idlib. "Helicopters and tanks are bombarding continuously," he told Turkey's state-run Anadolu agency. "Taftanaz has been burnt to the ground for three days." Activists posted video footage they said showed a helicopter gunship firing a missile at Taftanaz, and a mosque hit by shelling......."
Posted by Tony at 3:44 AM