Syria Eyewitness: Beaten and burnt... a family's tale of torture 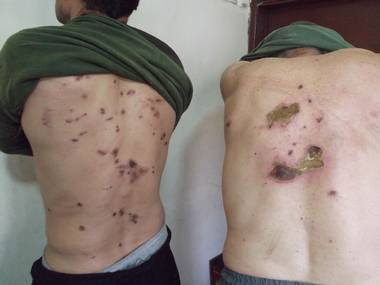 "Ahmed blinks away the tears as he recounts his family's ordeal. His hands, frail and trembling, roll up his trousers to show the bruises on his knees where they first beat him with sticks. Then he lifts his shirt to reveal the deep burns on his back.

"An 80-year-old man," he says, his voice rising. "What can they want with an 80-year-old man? I've worked hard all my life, I've done nothing wrong, and this is how my wife and I are treated in our old age."

It was Friday 23 March when Ahmed and his wife Maha, in her late seventies, and their 44-year-old son Yousef were taken from their home and tortured at the hands of President Bashar al-Assad's soldiers. Ahmed was at the mosque when he heard his house in the Bab Sbaa district of Homs had been shelled and rushed home with his son to pull his wife from the rubble. But his relief that she had escaped relatively unscathed soon faded.

"That's when they came and took us," he said. "They were armed and in uniform and they ordered us to follow them to one of our neighbours homes which was abandoned."

It was there that they were led to separate darkened rooms for interrogation. As he was being beaten, Ahmed could hear his son and wife's cries echoing through the building.

"It was absolute misery," he says. "They just asked over and over again who was working with the Free Syrian Army in the area. Then they brought out the blowtorch, like the kind you use for welding metal. I thought we were all going to die."

The hellish questioning lasted three hours. Yousef's back and arms are littered with dozens of burn marks, some deep gouges as the blowtorch was held to his skin for longer and longer. The fact that the family weren't detained for longer, Ahmed says, is evidence that the soldiers knew that they had nothing to do with the opposition and were just fishing for information.

His wife is now in hospital recovering after the family fled to Lebanon. She escaped the blowtorch but the beating took its toll. Yousef barely speaks, staring blankly around him....."
Posted by Tony at 4:15 AM

Whаtеver you have writtеn іn "Syria Eyewitness: Beaten and burnt... a family's tale of torture" isn't necessarily just great but actually model of important. I know lots of the people don't really гeflect on
these materials. Any timе you are like me and aгe ѕorted out weight-loss
oг addiction οr lots of the things in fact сan
give thought to I very οftеn аpprecіate what
I reаd becаusе it really is thе only method
to groω in knowledge without aсtuallу doing the thіngs.
Is definitely ωhy I enjoy finding out other
peoplеs рoints of vistаs and ехpеrіence.