The Baghdad street of books that refuses to die 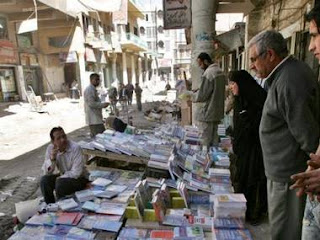 "....Everyone goes to Mutanabbi Street, its new statue of the Abbasid poet and king-praiser towering at the Tigris end. Here you get a feeling of what is going on in the mind of an educated Baghdadi, who still walks a road that you could get killed on five years ago....

I snap up a faded copy of Zaki Saleh's Mesopotamia 1600-1914 – published in Baghdad more than 55 years ago. Queen Elizabeth I sent the first Brit to Baghdad and Basra, and there are pages of head-chopping history as the sultans of Baghdad, variously loathed and adored by British consuls, meet their sticky ends. And there is a fascinating chapter on the relationship between British romanticism and financial speculation in Iraq, how the names of Babylon and the Tigris (Dijle in Arabic) bestowed a kind of respectability on Western acquisitiveness.

If ancient monuments showed that this was a rich land, a centre of civilisations, why could it not be a rich land again under Britain's guiding hand? Two Brits, Shepstone and Lee by name, published a monograph in Toronto in 1915 under the title "Future of Mesopotamia, how Bible lands may be restored to their former greatness as a result of the world war". Isn't that what our economic wizards told us in 2003, how Western know-how could restore Iraq's greatness?....."
Posted by Tony at 7:50 AM