Bahrain Grand Prix: Formula One demeans itself with this event 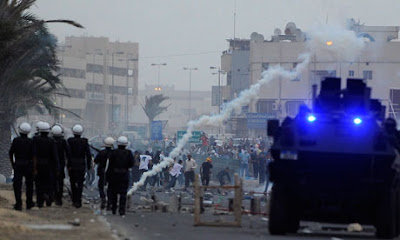 "The kingdom of Bahrain is a repressive regime that has jailed and killed citizens who campaign for the reform of its monarchy. In Shia villages in the minority Sunni-led state, which was propped up by last year's intervention by Saudi troops, protests continue daily.

Only last week, Shia villages were attacked by supporters of the regime with knives and sticks. And while it is true that the country's ruling family commissioned a critical report into the violence of last year, it is also a fact that despite promising reform the regime has reneged on most of its promises while the perpetrators of abuses in its security services have gone largely unpunished.

You might think, in these circumstances, that a leading international sport and those who represent it might feel a little queasy about being asked to stage an event in Bahrain that is already being used by the regime to whitewash what happened last spring and the abuses that are still occurring.....
The reality, however, as Amnesty made clear a few days ago, is that "the human rights crisis in Bahrain is not over". It added: "Despite the authorities' claims to the contrary, state violence against those who oppose the Al Khalifa family rule continues, and in practice, not much has changed in the country since the brutal crackdown on anti-government protesters in February and March 2011."

Perhaps it is too much to expect Ecclestone, who has enriched himself hugely out of Formula One, to show a moral backbone. But the drivers, sponsors and team owners who participate should consider that they will be giving cover to a violently human rights-abusing regime by their participation and will be seen by many Bahrainis and others as accomplices in those continuing abuses. We can act, too, by not watching. Because sport – despite the protestations of Formula One's paid lobbyists – is not divorced from the moral world and this event, and Bahrain's continuing behaviour, demands our disapproval."
Posted by Tony at 7:12 PM

Hi there, just became alert to your blog through Google,
and found that it is truly informative. I'm going to watch out for brussels. I'll be grateful if
you continue this in future. Many people will be benefited from your writing.

How can Microsoft and the owners of Firefox make money?
Google is going to make a browser and also to contend
with them called "chrome". I had been wondering where does the
cause of revenue are available in? There are no ads, etc .
These programs are free..