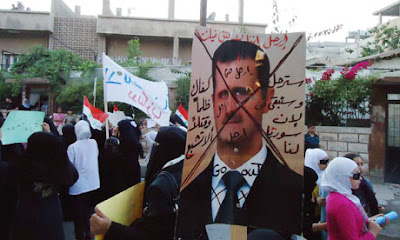 ".....The reality of the regime's response to revolts since the early 1980s has been very clear: smash the opposition and punish their towns and neighbourhoods, so they never dare to revolt again. This is one important way in which Syria differs from other Arab revolutions. In Tunisia, President Ben Ali fled the country. In Egypt, Hosni Mubarak sent camel-riding thugs to Tahrir Square. But Assad unleashed thousands of tanks, artillery, snipers, torturers, rapists and roaming killer gangs across the entire country. Assad's track record since April 2011 has been consistent and unambiguous: strike hard to punish demonstrators and deter their supporters, and engage in any available diplomatic process only as a secondary track.

Assad's problem is that his strategy, reflecting his father's legacy from the 1970s and 80s, no longer works. The more he ravages largely unarmed civilian demonstrators who challenge his legitimacy, the greater becomes the intensity and breadth of the revolt, and the parallel support for removing him from around the region and the world. It is still unclear, though, how the growing determination among millions of Syrians to change their government will translate into practical political assets that could actually end Assad's family rule.

This is the key to change in Syria. Action from abroad, including unanimous security council decisions, can only succeed if they enhance the opposition's ability to whittle away the regime's bases of support, especially through economic pressure that reduces the regime's ability to pay its supporters and pacify the population....."
Posted by Tony at 3:32 PM