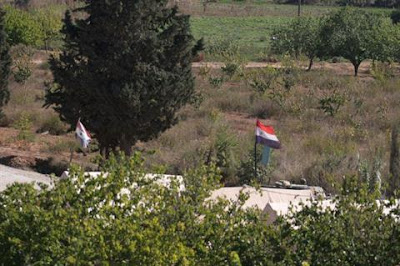 "Al-QAA, Lebanon: Seven people were killed, including a Lebanese man and members of Syrian General Security, and 21 others were wounded Saturday after a bus carrying pilgrims was struck by a mortar bomb while undergoing inspection on the Syrian side of the border with Lebanon.

The Lebanese victim of Saturday’s incident was identified as Mohammad al-Tala, who, along with another member of the bus, was on his way to Iraq on a Shiite pilgrimage, according to Lebanese security sources.

The five other victims were members of Syrian General Security who were inspecting the vehicle that had earlier passed through the east Lebanon border crossing of Jouesiyeh.

Four Syrian and seven Lebanese pilgrims were among the wounded, who were transported to three hospitals in Lebanon.

The sources said the vast majority of the passengers were Lebanese from the Hermel region and that they had been on their way to Iraq on a Shiite pilgrimage."
Posted by Tony at 4:33 AM