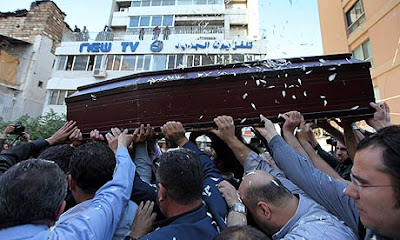 Mourners carry the coffin of Lebanese television cameraman Ali Shaaban, working for al-Jadeed TV who was shot dead on the Lebanon-Syria border, by Syrian troops.

"A UN-imposed deadline for a ceasefire in Syria has passed with government forces again shelling the central city of Homs, with no sign of an end to the crackdown that has killed an estimated 9,000 people over the past 13 months.

As Homs residents reported intermittent shelling and mortar fire on Tuesday morning, Turkey's foreign minister cut short a visit to China after Syrian forces fired across the border into a refugee camp.

Ahmet Davutoglu, in China with the Turkish prime minister, Recep Tayyip Erdogan, will return home to co-ordinate the response to Monday's incident near the town of Kilis in Turkey's south-western Gaziantep province. A Turkish foreign ministry official said at least five people were injured, including two Turkish nationals. Speaking to reporters in Bejing Tuesday, Erdogan said his country was considering its response [More Hot Air and Bla, Bla, Bla!], including measures "we don't want to think about".

It had been clear for some time that little was likely to come from the 6am Tuesday deadline for government troops and the rebel forces opposing them to lay down their arms, under a six-point peace plan by the UN-Arab League envoy to Syria, Kofi Annan. Syria's president, Bashar al-Assad, had demanded written guarantees that armed groups would first lay down their weapons. This was swiftly refused....."
Posted by Tony at 4:01 AM