Tahrir, Islamists and the bumpy road to theocracy 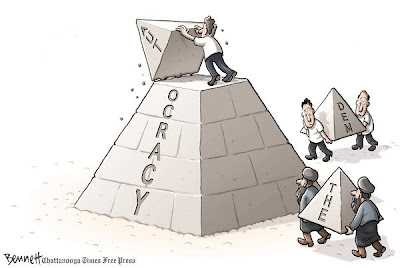 Muslim Brotherhood members and Salafists mobilized supporters to the square this morning in a call to “protect the revolution” from a perceived intention of Mubarak-era officials to dominate national politics once again.

“[Omar] Suleiman is the face the old regime. His eligibility to run represents a return to the days of Mubarak,” says an Abu Ismail spokesperson. “Suleiman can only win in a fraudulent election. If he does, there is no doubt that we will return to the streets and reignite the revolution.”

While the parliament recently passed a law banning former Mubarak officials to run for office, the ruling Supreme Council of the Armed Forces has yet to approve of it.....

Revolutionary youth movements who called for a mass demonstration next week were absent for today’s rally to distance themselves from the Islamists movements."
Posted by Tony at 4:32 AM