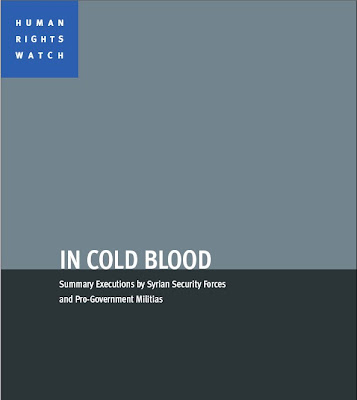 The 25-page report, “In Cold Blood: Summary Executions by Syrian Security Forces and Pro-Government Militias” documents more than a dozen incidents involving at least 101 victims since late 2011, many of them in March 2012. Human Rights Watch documented the involvement of Syrian forces and pro-government shabeeha militias in summary and extrajudicial executions in the governorates of Idlib and Homs. Government and pro-government forces not only executed opposition fighters they had captured, or who had otherwise stopped fighting and posed no threat, but also civilians who likewise posed no threat to the security forces.

“In a desperate attempt to crush the uprising, Syrian forces have executed people in cold blood, civilians and opposition fighters alike,” said Ole Solvang, emergencies researcher at Human Rights Watch. “They are doing it in broad daylight and in front of witnesses, evidently not concerned about any accountability for their crimes.”

Human Rights Watch called on the UN Security Council to ensure that any UN mission mandated to supervise the six-point plan brokered by the UN-Arab League envoy Kofi Annan would be in a position to document such crimes. This would be best achieved by sending, alongside military observers, properly equipped human rights monitors able to safely and independently interview victims of human rights abuses, while protecting them from retaliation....."
Download the full report (PDF, 164.64 KB)
Posted by Tony at 4:05 AM