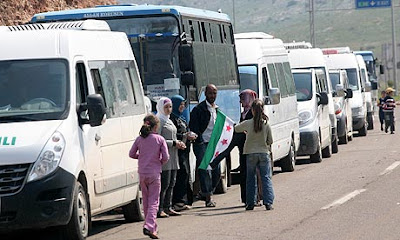 "Syrian forces have fired across the border into Turkey, hitting a refugee camp in the latest incident to fuel mounting international concern about escalating violence hours before a UN deadline to end the crisis.

There were reports from the AFP news agency that two people had been killed and at least 15 injured inside the camp near the town of Kilis in southwestern Gaziantep province on Monday – the first such incident since Turkey began sheltering thousands of Syrians last summer.....

Opposition activists poured scorn on Assad's demand for guarantees but argued it was entirely consistent with his strategy of buying time and exploiting the divisions of opponents at home and abroad. But many also blamed Annan for being naive to believe Assad had any intention of compromising. "The Syrian regime has just given Annan the finger," said one. Reports from local activists said 60 people had been killed across the country on Sunday......"
Posted by Tony at 4:27 AM