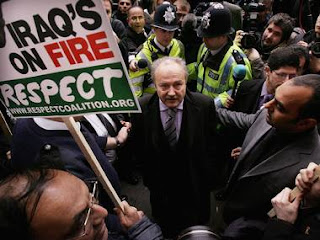 World View: Commentators who portray him as a self-serving demagogue are only showing their own biases

".....The invasion of Iraq turned into an even greater disaster. Many Iraqis wanted to get rid of Saddam, but very few wanted their country to be occupied by foreign powers. Given the tens of thousands of Iraqi dead, and Iraq torn apart by one of the most savage sectarian conflicts in history, was it really so wrong for Mr Galloway to oppose this war?

Few statements by the new member for Bradford West seem to have enraged pundits so much as his comparison between his own electoral victory and the Arab Spring. One interviewer, her voice rippling with distaste, asked how he could compare his success with a movement in which thousands had died. But Britain does sometimes feel like Egypt, a country in which disasters occur but somehow nobody running the country is ever held responsible and where power circulates within a narrow clique. Decisions on war and peace have been delegated to the US. Wars are fought supposedly to defend Britain against terrorism, when all the evidence is that they provoke it. It says something about the comatose nature of British politics that an effective critic of these failed wars like Mr Galloway, who beats an established party, should be instantly savaged as a self-serving demagogue."
Posted by Tony at 3:58 AM