7 British soldiers killed by the same gun. Was it Juba's Gun? 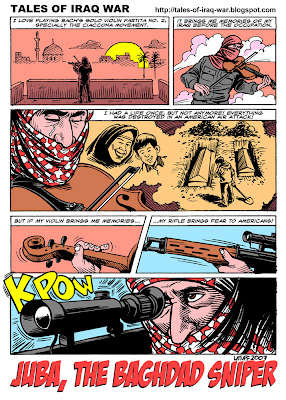 (Click on cartoon to enlarge)
"A single trained marksman is suspected of killing seven British soldiers in separate attacks in Iraq, an inquest heard on Thursday.

The sniper's victims are thought to include Cpl Rodney Wilson, who was killed when he was shot in the back while trying to rescue an injured colleague in Basra.

Analysis of the bullet which struck him showed it was fired from the same American-made weapon which has been involved in the deaths of six other servicemen in the city.