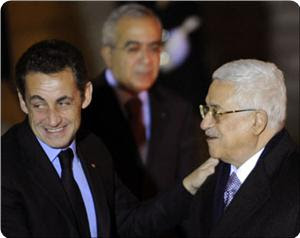 Earlier French President Nicolas Sarkozy called at the start of a donors’ conference in Paris for a new international force to beef up the Palestinian security services "when the time comes and when the conditions are right."

But Hamas said the move was purely intended to help Israel in its "declared war" against the movement. "This suggestion comes in the context of a declared war against the Palestinian people and against the Hamas movement and this is a call for a new mobilization," Barhum said.

Hamas, which democratically won a majority in 2006 parliamentary elections, has ruled the Gaza Strip since routing forces loyal to Palestinian president Mahmud Abbas in June.

The donors’ conference in Paris is intended to mobilize international economic support for Abbas, who has requested 5.6 billion dollars (3.85 billion euros) to finance an ambitious three-year development plan for the territories. It comes weeks after Israeli Prime Minister Ehud Olmert and Abbas formally relaunched the Middle East negotiations process in the United States at an international conference that Hamas has repeatedly condemned."
Posted by Tony at 5:23 AM