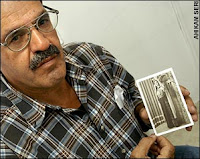 An Apology to Lula de Silva

I posted the Arabic version of this good article a few days ago.

"A whole year went by between the visit of the elected Brazilian President Lula De Silva's to some Arab countries, that are governed by unelected rulers, and the signing of an economic agreement between the Zionist regime and MERCOSUR, the common market for Brazil, Argentina, Uruguay and Paraguay.

Lula's visit was motivated by his sentiment, and that of his people, that the Arab nation is closer to Brazil than the Zionist entity.

My argument stems from the fact that when the US-British bloody invasion of Iraq took place, the Brazilian people were the first to protest against it. Lula was under the impression that a strong and vital economic relationship with Arabs might strengthen his country's resistance against the US capitalist domination. Additionally, there is no doubt that Lula considers trade with Arabs to be more profitable than that with the Zionist regime.

It is not necessary that a good Arab-Brazil relationship should mean the termination of Brazil's relationship with the Zionist regime, but it is certain that any level of Arab-Brazil cooperation will be at the cost of the enemy's ambitions, i.e. Israel, which is keen to expand in Latin America.

The Zionist "invasion" of Latin America is not new. It started decades ago with the Mosad's training of death squads in Latin America, and the black weapons trade, a trade that even the US and other imperialist powers avoid. In fact, weapons trade is subjected to a division of labor where black trade is left for the sub-imperialisms.

What is so crucial, and provoking, is that, while many Latin American countries are embarking towards a new socialism of the 21st century, the Zionist entity continues its deep penetration of these countries, while Arab rulers are absolutely absent. The recent trade agreement between the Zionist entity and MERCOSUR involves the sum of $2 billion a year. It will start with 20% of custom exemption for both agricultural and manufactured products. It should be noted that the total population of the members in this Latin American market matches the population of Arab people.

Arab rulers did not respond properly to Lula's initiative. They failed to gain Latin America, and even worse, they did not even try.

Why would such regimes even attempt to gain Latin America while they are deliberately losing Africa, and their own nation, despite the fact that Arab communities in both continents, Asia and Africa, are in millions!

What these regimes have really confirmed in the collective memory of other nations is that Arabs are slave traders, and blood suckers of the peoples in the periphery through high oil prices, while the truth is that most of the oil surplus is being "openly" stolen by the giant core capitalist corporations.

However, the truth lies in the fact that Arab regimes are too busy expanding normalization with the Zionist regime which is aimed at integrating that regime in the Arab Homeland as a dominant economic power. That is why nearly two dozens of those Arab regimes participated in the recent Annapolis conference without any Zionist promise or commitment to ease the life of Palestinians under occupation.

It should be noted, however, that Arab regimes neither represent Arab peoples, nor are they democratically elected. In other words, these regimes are some form of internal occupation.

Many might argue that some Arab regimes have economic agreements with Brazil. However, a visit of a leader from a country as large as Brazil, with such a big market needs to be dealt with in a different manner. The least it deserves is a unified Arab policy that is oriented to terminate, and replace, economic ties between this market and the Zionist regime. But, this policy needs Arab regimes of a different kind, those with a nationalist agenda.

The attitude of current regimes reminds us of the Arab-Soviet relationship in the last century, where Arab trade remained mostly with the imperialist core countries. Arab regimes did not try to consolidate their relationship with the Soviet block or at least use it for applying some pressure on the West to exert less hostility and aggression towards Arab issues.

In normal situations, such as when states have their own national agendas, this policy will be adopted. But, that is not the case with current Arab regimes. The main reason why these regimes lack national strategy is because they were created by British-French joint imperialist agreement (known as the Sykes-Picot Agreement of 1916) which was designed to fragment the Arab Mashreq, (Eastern Arab countries) into several small dependent entities. The same imperialists decided to create the Zionist entity in Palestine. My argument here is that both, the ruling dependent Arab regimes and the Zionist entity, were created by the same core imperialist regimes to serve their interests. Both are deeply related and tied to this core, as well. Accordingly, there is no real contradiction between these two creations: the Arab dependent regimes and the Zionist entity. This is the main difference between the position of Arab regimes and that of the popular Arab classes towards the Zionist regime. Arab masses feel that their contradiction with the Zionists is an antagonistic one, while that is not the case with Arab rulers.

Since this is the situation of Arab regimes, it is not an exaggeration to state that Arab countries are, in one way or another, colonized internally and externally. This theory is supported be evidence that was revealed in the recent Annapolis conference where Arab rulers participated in such a manner that is subjugated to the will of US ruling class, which has never hidden its complete alliance with the Zionists.

Finally, while the Zionist regime is expanding in Latin America and Africa, Arab regimes become more and more in the service of Zionism."
Posted by Tony at 8:09 AM