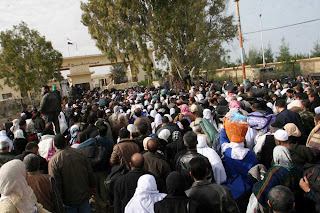 Let's not allow inhumanity to become the accepted norm. If we allowed it to triumph in Gaza, we are deemed to repeat it elsewhere.

A Good Piece
By Ramzy Baroud
Special to PalestineChronicle.com

"......Hamas's political advent in January 2006 as the first "opposition" movement in the Arab world to ascend to power using peaceful and democratic means was successfully thwarted in a brazen coup, engineered jointly by the United States, Israel and renegade Palestinians factionalists. Following this, history was rewritten, as is usual, by the victor. Thus Hamas, a party embodying democratic institutions in the occupied territories, became the party that "overthrew" Abbas's "legitimate" democracy. As strange a notion as that is (a government overthrowing itself), it went down in the annals of Western media as uncontested truth.

All parties involved, directly or otherwise, were expected to determine their position from this fallacious claim, and they did so to meet their own interests. Some had little problem in disowning Palestinian democracy altogether. The United States government, Israel, the European Union, and various non- democratic Arab governments were delighted by the outcome of Palestinian infighting. They celebrated Abbas and his faction as the true and legitimate democrats, and chastised those who disagreed. Countries such as Russia, South Africa and some Arab Gulf states followed suit, with some hesitation and disgruntlement, but too weak or indecisive to confront the status quo.

On the Palestinian front, the choices were harder, but nonetheless those who were previously aligned neither to Fatah nor Hamas now positioned themselves quickly on the side that served them best. Renowned leftists, for example, who normally spoke as though they were representatives of the voice of reason, now couldn't risk losing what few ineffective NGOs they operated in a management style more reminiscent of "grocery stores" (the actual name that many Palestinians use to mock many of the NGOs in their midst).

Fear of losing freedom of movement and access to US and European financial institutions motivated many Palestinians to disown Gaza completely. The sympathy millions of people worldwide felt towards the perpetually suffering Gazans translated mostly in the realm of the intangible. Helplessness prevailed and quickly joined the prevalent sense of powerlessness and incapacity long affiliated with Palestine in general and Gaza in particular......"
Posted by Tony at 5:08 AM