The Ramallah Mafia, With Eyes on Billions in New Donations, Have the Long Knives Out 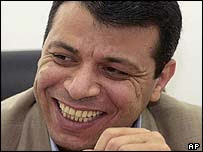 "Our sources report the revolt is led by ousted Gaza strongman Mohammed Dahlan, jailed terrorist Marwan Barghouti and Ahmed Qureia, chief Palestinian negotiator with Israel. If Palestinian Authority Chairman Mahmoud Abbas stands in their way, the Fatah leaders propose cutting Fayyad off from exercising his authority on the West Bank. The revolt was sparked, DEBKAfile’s Palestinian sources reveal, by the international donors’ allocation of $7.4 bn for state-building at their Paris conference five days ago. Dahlan and Co. are determined not to let this bonanza fall into the hands of a Fatah outsider, whose appointment was forced on them by Washington. The success of their scheme would spell the end of the peace process proclaimed by President George W. Bush, flanked by Ehud Olmert and Abbas at Annapolis last month.

The conspirators have gone into action by:

1. Leaning hard on Abbas to fire the prime minister and name a successor.

2. Efforts to persuade cabinet ministers, most of whom lack political backing either on the West Bank or the Gaza Strip, to defy Fayyad and start taking orders from the rebels.

3. Convening of the Fatah Executive Committee under the slogan: “Restore the Fatah to control of Palestinian decision-making!” The conspirators maintain that the Annapolis conference pushed Fatah out of key positions.

4. Intimidation of local activists on the West Bank, who have begun working with Fayyad. Dahlan and his co-conspirators are moving fast before the prime minister has collected enough money from the US and Europe to buy influence and an independent power base independent of Fatah.

DEBKAfile’s Washington sources report that Secretary of State Condoleezza Rice and Middle East Quartet envoy Tony Blair have got wind of the Fatah plot. They realize that if Fayyad, goes, so too does the prospect of orderly Palestinian government and transparent financial management. Their plans to create the institutions of statehood and an effective campaign against terror will go up in smoke.

They are especially dismayed to discover that Dahlan, long a close associate of Rice, champion of relations with Washington and friend of Israelis in high places, has taken up the cudgels against the “Americanization” of the Palestinian Authority."
Posted by Tony at 5:05 AM