What If America Were Invaded and Occupied? 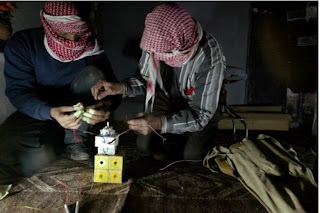 ""Suppose Iraq invaded America. And an Iraqi soldier was on a tank passing through an American street, waving his gun at the people, threatening them, raiding and trashing houses. Would you accept that? This is why no Iraqi can accept occupation, and don't be surprised by their reactions," says "The Imam," a young man from a mixed Sunni-Shia family, as he explains the genesis of the insurgency in Iraq and its exponential growth......

The eighty-five-minute groundbreaking film focuses on ten members of the Iraqi resistance. Interspersed with stunning footage of the aftermath of car bomb attacks, of frightened soldiers aiming their weapons at crowds of Iraqis, and of burning remains of destroyed military vehicles, the meat of the film is the words of the fighters themselves.

The complex nature of their lives speaks to the intricacies of the Iraqi resistance.....

Aside from screenings at international film festivals and numerous private and public shows, Connors and Bingham screened the film at West Point, the U.S. Marine Corps staff college at Quantico, and Baghdad.

Bingham feels that the film represented a radically different perspective to the military personnel who viewed it.

"The bulk of the people were taking on new information that was a dramatic paradigm shift for them," she says. "To see their enemy as largely fighting for their homeland because of nationalism and religion, rather than being terrorists, is a big deal.""
Posted by Tony at 8:58 AM