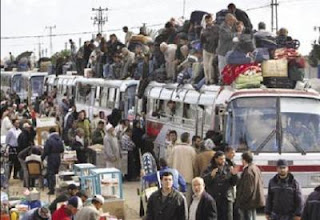 "Popular Committee Against siege (PCAS) expressed today, Saturday, full readiness to act as mediator among all parts to reopen Gaza's borders. PCAS stated that there must be a compromise among all sides to ensure permanent opened crossings including Rafah terminal.

The committee confirmed that this step comes from its awareness towards alleviating suffering of students, patients, labors, businessmen and all society classes. The PCAS asserts that it works far from any political affiliation.

This initiative comes today, December, 22, 2007, after widespread news among formal Palestinian figures and politicians as well. Additionally, there have been some decelerations made by international individuals regarding operating Gaza's crossing points under international control.

Palestinian independent MP and Chairman of PCAS, Jamal N El Khoduri, welcomed any agreements that could lead to reopening all crossings and facilitating trade movement as well as individuals. Thus, this will help to alleviate sufferings of people.

El Khoduri said that PCAS believes that there would be a possibility to find out a compromise that leads to end the recent suffering and reopens closed crossings for the past 6 months. "The closure of these crossings caused environmental, health and economic crises on the ground. These crises will leave negative impacts for long time" Stated Chairman El Khoduri.

He called all linked parts to start working rapidly to meet the Palestinian people's requirements in the Gaza Strip regarding reopening crossing points. Chairman asserted on the importance of these crossing considering them as vital life's vein.

The chairman called upon the International community to put more pressure on Israel to end this humanitarian crisis.

"the raised funds and donations proposed for Palestinians in Paris economic conference will not contribute in the development process in case the recent situation remains as it is. The statuesque in Gaza strip includes flagrant violations of human rights accords, charters and four Geneva conventions." PCAS's chairman said."
Posted by Tony at 7:08 PM

Highly dеѕcгiptivе blog, I liked that
bit. Will there be a part 2?