Leading article: 'We are not handing over a land of milk and honey' 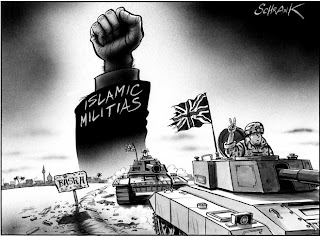 ".....For all the fine words and formality, however, there was no concealing the uncomfortable and many-layered truth. This was not a victory, certainly not for the British, but not for the Iraqis either. For security reasons, the ceremony took place not in the city of Basra proper, but at the airport encampment to which the British had withdrawn three months earlier. The control that the British were handing over to the Iraqis was a flattering way to describe a security muddle contested by rival militias. Nor were the British actually leaving. They were merely moving from a combat to an "overwatch" function, which means that they will continue to train Iraqi forces and can be called upon to assist them, if needed......

With British troops no longer on the frontline anywhere in southern Iraq, that hope will now be tested. But it is a bleak legacy that this wholly unnecessary conflict leaves behind, and one that will not be erased for a very long time."
Posted by Tony at 4:13 AM