A Christmas Reflection on Palestine 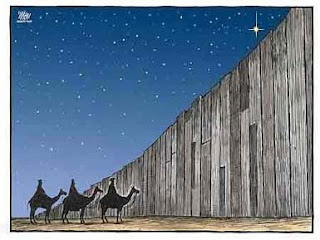 Christians and Muslims Weep Together

".....A dangerous Christian ideology which endorses the rhetoric of Zionism and the conquest of all Palestine for Israel is making its presence felt in Australia. This Christian fervour for Israel has found expression in a revitalised Christian Zionism that began back in the sixteenth century [3] and is directed today against Islam and Muslims. In America particularly, it has misconstrued the messianic and apocalyptic legacy of the Christian faith and has replaced the Jewish and communist Anti-Christ of Christian Zionism's earlier imaginings with an Islamic Anti-Christ. This Anti-Christ, it believes, will be defeated in Israel where all mankind will gather for the coming of the Messiah. That it should take place in Israel, given the numbers of the world's populations, is an absurd notion even amongst the most devout. That the dispossession, degradation and humiliation of the Palestinians who have lived in this land for millennia, can be condoned on such a pretext is even more abhorrent and preposterous......

And that is the sum of what is so often forgotten in the search for peace and justice: the escalating inhuman situation suffered by the Palestinians ­ Christians and Muslims.

Sing as we might this Christmas, the hopes and dreams of all the years is unlikely to be met in Bethlehem for those who live there. Nor are they likely to be met for the Palestinians barely hanging on to their miserable existence in Gaza, or the Palestinians in the other cities, towns and villages in the Holy Land and even less for the stateless Palestinians long deprived of hope in the refugee camps. Every chorister's hallelujah will just be a death knell for another generation of Palestinians and every Christmas reflection will become meaningless words of Christian faith, unless we are prepared to look beyond the tinsel and the feasting and really do something to stop Israel's crimes against both Christians and Muslims in Palestine."
Posted by Tony at 9:40 AM