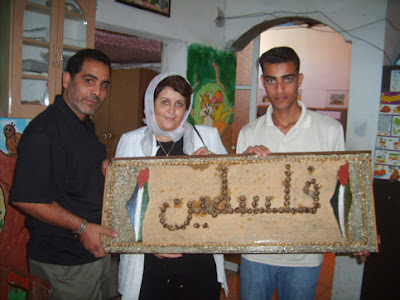 From left, Talal Abu Shawish, Dr. Mona El-Farra, and Hany El Sharif, who started with the association as a child and now volunteers as an activities guide for the kids. The sign reads "Palestine" in Arabic.

".....Of Gaza's 1.5 million residents more than 60 percent are under 18. The effects of malnutrition are seen not only in the kids' hunger, but also in their brain function. They are unable to focus in school, and have become violent. Dr. El-Farra's organization, the Middle East Children's Alliance (Gaza), is the focal point of a network of organizations trying to help Gaza's children. They give food parcels to the families, which are aimed at the nutritional needs of the kids, and try to teach the parents how to feed them better.

"The lack [of food] here is all political, not from famine or drought," says Dr. El-Farra. "The kids are not hopeful. There is no safety or recreation. It's bad for everyone, but it is most profound when the kids are complaining and have no hope."

Humanitarian groups in Gaza are also trying to feed another hunger: keeping the Palestinian culture alive through teaching traditional dancing, music, and art. The Afaq Jadeeda (New Horizons) Center in Nuseirat, established in 1996, provides a creative outlet for more than 50 children daily, and holds summer and winter camps. The center also has a library, a stage for plays, a football team and a growing computer lab, and is in the process of funding English classes for kids ages 14-18. $50,000 would give them what they need for a fully functioning center, but they do what they can with what they have, as they work on bringing in more donations and money.

"The average family in Gaza has seven people," says Afaq Jadeeda vice president and schoolteacher Talal Abu Shawish. "In the refugee camps, families are trying to build up their own areas. That's why it is important to have the cultural centers: to bring the kids off the streets into something more positive."

But the problems are not only on the streets now; they are also in the schools......"
Posted by Tony at 9:22 AM