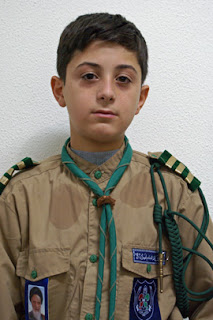 ".....Yet in politically divided Lebanon, sectarian divisions are apparent even in the country's 27 youth groups, with each political party possessing its own organisation for young people.

And Hezbollah, the main Lebanese Shia party and armed movement, is among those with its own youth group, the Imam al-Mahdi Scouts, some of whose members go on to become fully-fledged Hezbollah fighters.

Dr Bilal Naim, president of the Mahdi Scouts, told Al Jazeera that the group places importance on telling Scouts about the work of the Islamic Resistance, Hezbollah's armed wing.

"After 15 or 16 years old, we say to everybody that the Islamic Resistance is one of the foundations that defends against Israel and that the jihad [struggle] against Israel is one of the concepts of Islam," he said in the district of Haret Hreik, Beirut. But Naim said that the group, which caters for boys and girls, also has a programme of activities similar to those of other Scout brigades across the world.....

Hasosoun says that while some Scouts go on to become a member of the Hezbollah's armed Islamic Resistance group, there is no compunction on them to do so.

"Yes, it is continuous [that Scouts go into the resistance]. We also teach them administrative skills. We cater to an individual's personal desires and needs," he says. "But it is not obligatory that everyone will join the resistance.".....

The Scout group was licensed by the Lebanese ministry of education in 1992 and joined the Lebanese Scout Federation six years later, but it has faced criticism for allegedly indoctrinating children.....

The claims of indoctrination have been rebuffed by the Scout group, which has called the report "an organised attack [which] aims at erasing the culture of the resistance," in its own published response.

As for the contentious literature, "Sharon will always be a criminal in the minds of the Lebanese children for he has committed hundreds of massacres," the Mahdi Scouts say.

Controversy will remain over whether the Mahdi Scouts is a simple youth organisation or a dedicated 'feeder' group for Hezbollah......."
Posted by Tony at 10:42 AM