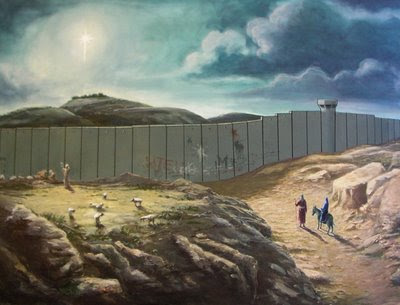 "The Bethlehem craftsman Tawfiq Salsaa says simply that he was "inspired" to produce the first model with a "political meaning" he has turned out in more than half a century of continuous carving in olive wood and mother of pearl. "I was thinking about our problems and I thought that if Jesus was to come here today, he would find a wall. Then I started working on it. That's how it came to express our situation."

"It" is certainly the most striking crib you'll find this Christmas, deftly combining the nativity with the stark realities of Bethlehem 2,007 years later. Its beautifully carved wooden parts, detachable for easier packing and dispatch, depict the familiar scene of the infant Jesus, Joseph and Mary, the three wise men, complete with camels, and depending on the buyer's taste, a palm tree or a stable, to indicate that there was no room at the inn.

But in the middle, separating Magi from manger, is an unmistakable representation of the Israeli military's separation barrier, the forbidding eight-metre-high wall that snakes round Bethlehem from the terminal-like checkpoint at the northern entrance to the city and which leaves such an indelible impression on every first-time pilgrim on their way to the Church of Nativity from Jerusalem at this – or any other – time of the year.....

......But the barrier will be a burning issue for far longer than this Christmas rush – and not just round Bethlehem but for the whole of its 450-mile route, much of it cutting into the West Bank, dividing many communities from their relatives and neighbours, agricultural land and, sometimes, schools, universities and 24-hour medical services – trapping some 50,000 Palestinians between it and the 1967 Israeli-border. Around Bethlehem, the barrier will, in the words of a UN report in July this year, "sever the last route between Bethlehem and Jerusalem and isolate the majority of Bethlehem's agricultural hinterland". Some two miles into the West Bank side of the 1967 green line, it means that farmers in its western districts will only be able to reach their land by going through a tunnel that passes under it....."
Posted by Tony at 7:28 AM