Blair called for BAE inquiry to be halted

"Tony Blair's personal role as prime minister in halting the Saudi arms sale bribery investigation is revealed in court documents which the Guardian is publishing in full on its website.

His chief of staff told the cabinet secretary, Gus O'Donnell, on October 3 2006: "The attorney general is of the firm view that, if the case is in fact soundly based, it would not be right to discontinue it."....." 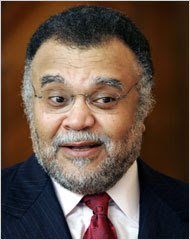 Video: Prince Bandar, challenged as to whether there is corruption in deals with the Saudi royal family, replies: "Yes. So what?"
Posted by Tony at 7:09 AM