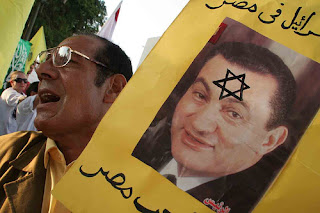 In contrast to Mubarak's ruling National Democratic Party, virtually all of Egypt's opposition parties stand against diplomatic normalization with Israel.

The Muslim Brotherhood movement in particular, which represents Egypt's biggest opposition bloc in parliament, remains adamant in its refusal to acknowledge the state of Israel or accept the terms of the Egypt-Israel peace accord.

"The Muslim Brotherhood does not recognize Israel and rejects the Camp David agreement," Essam al-Arian, head of the movement's political department, told IPS. "If a popular referendum were held, we're sure the people would also reject it."

Thabet, for the most part, agreed with this assessment.

"Camp David was signed by the small political and economic elite that governs Egypt," he said. "But the people, along with opposition groups of all stripes, reject the treaty."

According al-Arian, the same can be said about Cairo's recent economic understandings with Israel.

"It was the Egyptian government that agreed to the QIZ scheme and the natural gas sale," he said. "But these deals don't enjoy any popular support."

All of Egypt's many professional unions also remain staunchly against the idea of cooperation with the Hebrew state.

"Every one of the professional syndicates, along with most writers and intellectuals, stand against diplomatic normalization," said al-Arian, who is also assistant secretary-general of the Egyptian Doctors Syndicate. "Those who depart from this stance can expect to have their syndicate memberships suspended."

According to Thabet, official Egyptian cooperation with Israel must be seen within the context of US influence on Egyptian policymaking.

"Cairo signed these agreements with Israel -- despite tremendous popular disapproval -- at Washington's behest," he said. "Because, at the end of the day, the regime needs Washington to keep it in power.""
Posted by Tony at 5:39 AM