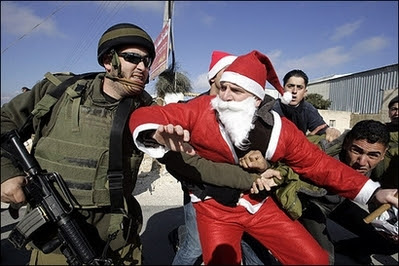 "BETHLEHEM, West Bank (AFP) - Israeli guards beat five demonstrators, including one dressed as Father Christmas, during a protest on Friday against Israel's separation barrier in the West Bank, organisers said.

About 50 Palestinian, Israeli and international peace activists attended the rally in the village of Um Salomona, near Bethlehem, the Biblical birthplace of Jesus that is preparing to celebrate Christmas.

Israeli border guards armed with truncheons briefly detained one activist and beat another five during the rally, the organisers told AFP, adding that one was wearing a Santa Claus costume......"
Posted by Tony at 7:50 PM