Nahr al-Bared treated outside of the law 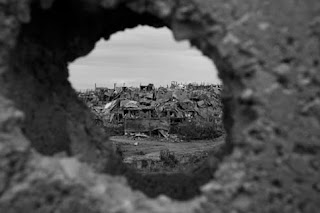 Sari Hanafi, Associate Professor of Sociology at the American University of Beirut.
The Electronic Lebanon, 17 December 2007

"......The destruction of the Nahr al-Bared camp is one main of the consequences of the camps being a space of exception, but after the fighting ceased, there came more. From the official end date of the fighting in early September until 10 October, the camp was placed exclusively under the control of the Lebanese army, not allowing residents of the new camp to return. Later, thousands returned to houses that had been burnt, looted and vandalized. Interviews we conducted as well as those by the Amnesty International Fact Finding Mission attest to what appears to be a systematic pattern of burning and looting. Racist graffiti written in many homes of the camp is accompanied by the names of various Lebanese army commando groups. While the preliminary looting had committed seemingly by Fatah al-Islam and some camp inhabitants, however, who has been doing that if nobody can enter the camp except the Lebanese army?

Not only did Fatah al-Islam perceive the camp as a space of exception and out of law but so did some of the army officers. It can be looted and vandalized, and thus, so far no independent investigation has been carried out, although Amnesty International has written to the Lebanese prime minister and to Ministry of Defense calling for an investigation to be initiated and those responsible to be held accountable.

It is very interesting that there is almost no public debate over such an important issue. As a space of exception, the camp has constituted an emergency zone where witnesses are not allowed: even journalists and human rights organizations are being denied entry to the camp. It is this suspension of laws that facilitates the potentiality of vendettas and looting. The Palestinian population is homo sacer: people whose property is not only destroyed but also looted without allowing the criminals to be prosecuted.

Many refugee camps are at the verge of catastrophe and no security solution can stop this route. It can only be helped by engaging in a serious process based on the following elements: allowing the Palestinian refugees to have full access to the labor market, including liberal professions; allowing the Palestinians the possibility to possess land and property; establishing an elected popular committee in each camp, a quasi-municipality, to be in charge of the camp administration; establishing joint Palestinian-Lebanese police centers in each camp; and, finally, the ending of the space of exception status of the camps by submitting the camps to the full Lebanese laws."
Posted by Tony at 4:30 AM