Somalia: A nation in ruins 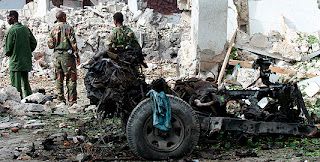 Al Jazeera's Mohammed Adow and Andrew Simmons travelled to different parts of Somalia to witness first-hand what is going on in the anarchic Horn of Africa nation.

"Moving through the chaotic capital of Mogadishu, one comes across a grisly scene: several artillery shells had just hit the capital's Bakaara market.

Dismembered bodies, blood and severed limbs lie everywhere. And as is often the case, all the victims are civilians. Such scenes are not uncommon in this theatre of war, but they are rarely captured on camera.

Those lucky to escape the attack run for dear life. But in this city, there is nowhere to hide.....

Many Islamic Courts' Union fighters are still licking their wounds from the fighting with Ethiopian forces, but they remain bold enough to venture out into the streets. They have also become increasingly confident in recent months.

Along with Ethiopian forces, they are also accused of targeting civilians, a charge they strongly deny.

"We are the people and the people are us. We are not any different," one Islamic Courts' fighter told Al Jazeera.

"We are victims of our enemies who attacked our land after Somalis enjoyed six months of peace and tranquility under the Islamic Courts.

"They are the enemies of Allah, Muslims and the Somali people."....

Mogadishu's desperate situation is echoed in other parts of the country. In Galguduud, a town several hundred kilometres north of the capital, aid workers from Medicins Sans Frontieres Belgium struggle to treat those in need......."

It is interesting, and characteristic of the English edition of Al-Jazeera, that no mention is made of the fact that it was the U.S. that pushed Ethiopia to invade Somalia and it is the U.S. which still arms and finances the continuing Ethiopian occupation. The report completely absolves the U.S. of any responsibility, by omission of the U.S. role.
Posted by Tony at 10:57 AM