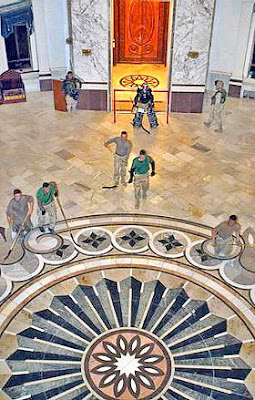 Can Iraqi sites that have survived seventeen centuries survive the US military?

"American soldiers in Iraq have been issued with thousands of packs of playing cards urging them to protect and respect the country’s archaeological sites, in an effort to curb the destruction and plunder of Iraq’s antiquities......

.....The effort to induce greater cultural awareness among US troops comes amid dire warnings from international archaeologists that Iraq’s ancient heritage is in greater peril than ever.

The looting of the Iraqi National Museum in the aftermath of the 2003 invasion caused widespread outrage, but with the security situation deteriorating, the robbery of ancient sites has accelerated to feed a booming illegal trade in stolen artefacts.....

....But some experts say that the well-meaning effort to instil cultural sensitivity in the troops comes far too late.

In one of the most notorious incidents, US troops constructed a helicopter pad on the ruins of ancient Babylon, filling sandbags with remains from what was once the holy city of Mesopotamia. The US military base built five years ago on the site of the ancient city of Ur, believed to have been the home of the prophet Abraham, is also causing irreparable damage. Under the Hague Convention heritage sites should not be used as military bases. US officials said that the base at Babylon had been built to protect the site, a claim dismissed by most archaeologists."
Posted by Tony at 6:45 AM