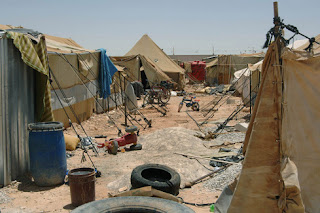 "CAIRO, Egypt —Hundreds of Palestinian refugees who've been forced out of their homes in Iraq are stranded in a remote stretch of the Syrian desert, where they're living in tents that offer little shelter against blinding sandstorms and the biting cold of winter nights, according to humanitarian aid workers and refugees.

Syrian authorities have barred the Palestinians from leaving the Tanaf refugee camp near the border with Iraq. Journalists aren't allowed to visit.

But United Nations officials and camp residents reached by phone described deteriorating health conditions, with an increase in illnesses related to contaminated water and skin afflictions caused by unhygienic conditions. Many children have lice, the Palestinians said, and the elderly suffer from diabetes and high blood pressure. They survive solely through handouts from the U.N. and Arab humanitarian groups.

"We die a thousand times a day," said Wafaa Mazhar, 37, a mother of five who said that her 16-year-old daughter was diagnosed with leukemia six months ago at Tanaf. "We Palestinians are leading miserable lives. We're helpless, and no one feels our pain."....."
Posted by Tony at 10:10 AM