A break in the siege 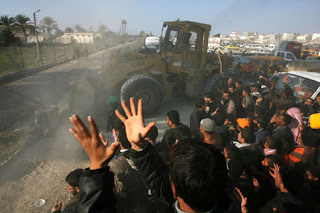 ".....Walking the length of the now partially demolished Rafah wall one is struck by two contrasting and competing realities. On the one side lies the sliced and twisted remnant of Israel's siege policy backed and underwritten by Washington, a clear demonstration that a people can only be suppressed and oppressed for so long. On the other side is the human cost, the over 3,000 houses demolished by Israel in plain view of the world, as they built the wall in preparation for their "withdrawal" from Gaza.

The remnants of those houses remain, creating a vast moonscape of blasted concrete and sand, roughly a kilometer wide and several kilometers long. My friend Fida, a teacher and blogger from Rafah, points out where her house once stood, as well as those of her grandfather, grandmother, uncles, aunts, and other relatives. Beyond the sea of demolished houses are those still inhabited but riddled with bullet and shell holes, some dating from the beginning of the second intifada in 2000 and others more recent. Her young cousin Walaa explains, "this is our life," and it sums up both realties....

Meanwhile, the Bush administration's policy of punishing Gaza while "rewarding" the West Bank with aid and attention, while still supporting Israel's occupation of both with even greater aid, is now in tatters. Moreover, the renewed peace process, which has yet to demonstrate a single improvement in the lives of Palestinians in spite of the claims of some delusional and self-serving proponents, will now be under even greater pressure to show results......"
Posted by Tony at 8:20 PM