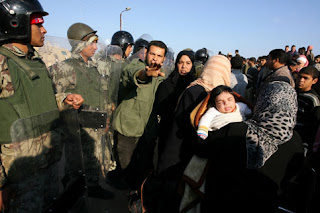 "JERUSALEM, 31 January (IPS) - Already testy relations between Jerusalem and Cairo have frayed further in the last week as hundreds of thousands of Gazans have poured through a hole blasted in the Egypt-Gaza border fence, in a bid to escape a suffocating blockade imposed by Israel on the coastal strip......

In the last few days, Egypt has begun resurrecting the wall along the border. But while Israel and Egypt might both be deeply concerned by Hamas's takeover of the strip, their divergent interests are likely to ensure that the latest border spat is not the last Gaza-induced diplomatic tiff between the two countries."
Posted by Tony at 5:14 AM