They Were Only Arabs; Israel drops Arab killings case 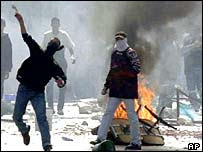 Israel's attorney general says no policemen will be prosecuted over the killing of 13 Arab Israeli protesters in 2000.

"Menachem Mazuz said there was insufficient evidence to pursue a prosecution against officers who opened fire during anti-government riots.

The unrest erupted in sympathy with the Palestinian uprising against Israel.

Relatives of the victims were angry at the decision. One said it "gives the green light for attacks on Arabs".

In northern Israel, thousands of Israeli Arabs took to the streets for several days in October 2000, expressing solidarity with the "intifada" that had broken out in the occupied Palestinian territories.

Protesters threw stones and petrol bombs at police and passers by, leaving several people injured and one Jewish motorist dead.

Police opened fire with live ammunition to try to quell the protests, killing 13 people near the Israeli Arab town of Um el-Fahm......"
Posted by Tony at 4:35 AM