The slow genocide is still under way in Gaza ! Act Now ! 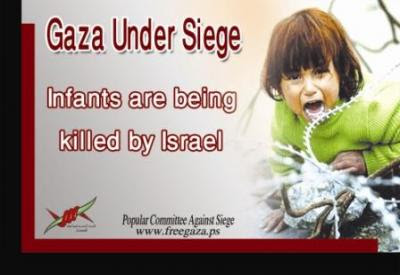 "We were all pleased to see a new wall tear down, but unlike the Berlin Wall, this does not mean that the occupation is over and Gazans are free.

Egypt closed the border back and the 5 days of freedom the Gazans courageously allowed themselves by demolishing the walls of their prison didn't allow them to erase 6 months of blockade, without medicines, without drinking water, without electricity, without fuel, without food balanced, without freedom.

The mainstream media reported that Israel will resume its fuel deliveries to Gaza, but they forget to mention that it will deliver only 20% of the amount necessary to the Gaza needs. Israel has also announced that on February 7, it would reduce by 5% its electricity supplies to Gaza where power is severely lacking.

In Gaza, the humanitarian situation is still dramatic:

86 patients have been killed by Israeli Occupation due to Closure!

1562 patients are in need of treatment outside Gaza Strip and 322 patients have reach a critical stage. If the siege continues, 470 cancer patients will die.

The mobilization must go on.

We must pursue the work and ask this inhuman siege, which constitutes a war crime involving our governments, be lifted.

Ask your MPs, the Ministry of Foreign Affairs, the European Union, your representatives to the United Nations how they can sleep the night when people are dying due to their decision

Ask them if the Palestinian genocide is the only way they found to solve the Jewish issue.

Get out in the streets, demonstrate, and organize candlelight vigils in solidarity with the people of Gaza.

Take part in the global effort organized on February 23th calling for the End of the Gaza Siege!

The action of protests will be across European, Arab, southern and Latin American countries.

Contact us, the Popular Committee Against Siege in Gaza (PCAS), and let us know what you are preparing for this global action!

Please, forward this call around you.

We need your help to Free Gaza !