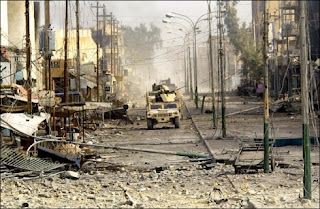 Three years after the devastating US assault, our correspondent enters besieged Iraqi city left without clean water, electricity and medicine

"Fallujah is more difficult to enter than any city in the world. On the road from Baghdad I counted 27 checkpoints, all manned by well-armed soldiers and police. "The siege is total," says Dr Kamal in Fallujah Hospital as he grimly lists his needs, which include everything from drugs and oxygen to electricity and clean water.


The last time I tried to drive to Fallujah, several years ago, I was caught in the ambush of an American fuel convoy and had to crawl out of the car and lie beside the road with the driver while US soldiers and guerrillas exchanged gunfire. The road is now much safer but nobody is allowed to enter Fallujah who does not come from there and can prove it through elaborate identity documents. The city has been sealed off since November 2004 when United States Marines stormed it in an attack that left much of the city in ruins.

Its streets, with walls pock-marked with bullets and buildings reduced to a heap of concrete slabs, still look as if the fighting had finished only a few weeks ago......"
Posted by Tony at 4:28 AM