Another meeting between Abbas and Olmert soon 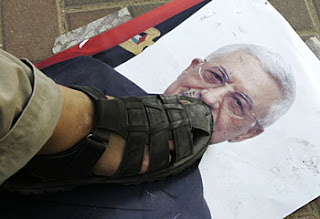 "NAZARETH, (PIC)-- The Israeli Prime Minister's office announced that a meeting between Ehud Olmert, and the PA President Mahmoud Abbas is to take place soon according an Israeli radio report on Friday. The news report stated that the meeting is in accordance with previous arrangements to have fortnightly meetings.

Observers, however, noticed that such meetings rather than being utilised for furthering the so called peace negotiations are serving as policy coordination meetings.

This was very clear in Abbas's handling of the border crossings issue of Gaza after the people of Gaza decided to breach the border with Egypt in a bid to break the siege imposed on the Gaza Strip by Israel and it allies. For whereas Hamas is insisting that the Rafah border crossing is a purely Egyptian-Palestinian crossing and should be treated as such, Abbas insists on involving the Israelis and the Europeans in the crossing as a precondition for reopening it.

Furthermore, while Abbas insists on rejecting unconditional talks with Hamas, he did not forget, while he was in Cairo, to call Olmert and congratulate him on the fact that the latter was not implicated in the Winograd report.