Power of the people 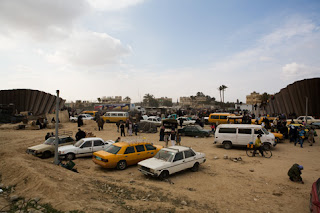 Nada Elia writing from US, Live from Palestine, 29 January 2008

".....And even as I am writing this, news comes in that Israel has killed Mohammad Harb, the Gaza leader whose forces blew up sections of the wall, allowing Palestinians to stock up on essentials. Harb paid with his life for the temporary freedom of my people, the people who democratically elected him as their representative, despite immense pressure from Israel and the US to "elect" a peon of the occupation. So I do not want to forget. Harb was the people's choice, and it is people power that brought the wall down.

And that is one model we can all emulate, wherever we are. If disenfranchised Palestinians could bring down a wall constructed by the region's most heavily-armed nuclear power, backed by the world's uberpower, then all oppressed peoples, everywhere, can do it too.

Today, for a brief moment, it feels great to be Palestinian."
Posted by Tony at 8:30 PM