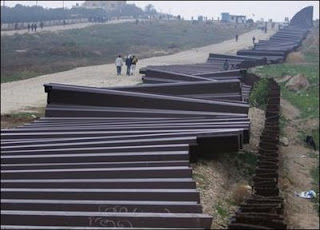 Palestinian people have succeeded where politics and thousands of international appeals have failed. They took matters into their own hands and they prevailed.

By Ramzy Baroud
Special to PalestineChronicle.com

"In a radio interview prior to the US invasion of Iraq, David Barsamian asked Noam Chomsky what ordinary Americans could do to stop the war. Chomsky answered, “In some parts of the world people never ask, ‘what can we do?’ They simply do it.”

For someone who was born and raised in a refugee camp in Gaza, Chomsky’s seemingly oblique response required no further elucidation.

When Gazens recently stormed the strip’s sealed border with Egypt, Chomsky’s comment returned to mind, along with memories of the still relevant - and haunting - past......

This “largest jailbreak in history”, as one commentator described it, will be carved in Palestinian and world memory for years to come. In some circles it will be endlessly analysed, but for Palestinians in Gaza, it is beyond rationalization: it simply had to be done.

Armies can be defeated but human spirit cannot be subdued. Gaza’s act of collective courage is one of the greatest acts of civil disobedience of our time, akin to civil rights marches in America during the 1960’s, South Africa’s anti-Apartheid struggle, and more recently the protests in Burma.

Palestinian people have succeeded where politics and thousands of international appeals have failed. They took matters into their own hands and they prevailed. While this is hardly the end of Gaza’s suffering, it’s a reminder that people’s power to act is just too significant to be overlooked."
Posted by Tony at 6:09 AM