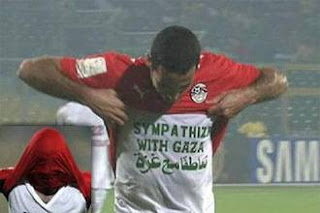 Aboutreika booked for 'Sympathize with Gaza'

"Egypt's Mohamed Aboutreika has been warned by the Confederation of African Football (CAF) for displaying a slogan in support of Gaza at the African Nations Cup finals in Ghana.

Aboutreika lifted his strip to reveal a tee-shirt with the slogan 'Sympathize with Gaza' as he celebrated scoring in the 3-0 win over Sudan in Friday's Group C match in Kumasi.

The midfielder was booked for his actions.

CAF officials said Aboutreika had been warned after the incident for breaching regulations by displaying political slogans, although his statement appeared to be more humanitarian than political.

Aboutreika's action came on the same day as clashes between Palestinian residents, seeking to break the blockade of Gaza, and Egyptian police...."
Posted by Tony at 7:29 AM