The Strangulation of Gaza 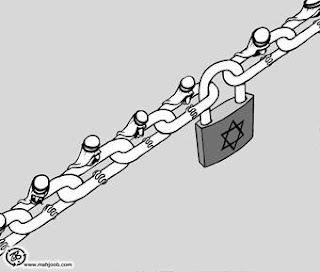 By Saree Makdisi
The Nation

"......Working together, Hamas and the people of Gaza have forced Egypt's hand and made much more visible than ever before the role it had been playing all along in the Israeli occupation and strangulation of Gaza; now that its role in assisting Israel has been revealed, it will be difficult for Egypt to go back to the status quo. Gazans have thrown Israel's plans into disarray, because Israel's leaders could do little more than watch with pursed lips as the people of Gaza burst out of their prison. And they have placed Palestinian Authority President Mahmoud Abbas and the government of Ramallah in a corner: they will have to choose between defending their people's rights and needs or confirming once and for all--as indeed they are doing--that the PA is there to serve Israel's interests, not those of the Palestinians. In which case they too will one day be called to account."
Posted by Tony at 12:02 PM