Thousands of Palestinians demonstrate against the siege in Rafah 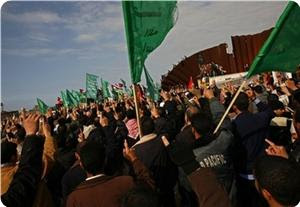 "RAFAH, (PIC)-- Thousands of Palestinians on Friday afternoon participated in a demonstration, called for by Hamas, to protest the continued siege which is suffocating the Gaza Strip.

The mass demonstration, which took place at the Salahuddin Gate on the Palestinian Egyptian border in Rafah in the southern Gaza Strip, started at the Awda Mosque in the central Rafah district. The demonstrators called for the immediate re-opening of the Rafah crossing to avoid popular anger which could lead to a very explosive situation.

The demonstrators also called on Arab and Muslim countries to break the siege and expressed their condemnation of the shameful "official Arab silence towards what is happening in Palestine."

Participants carried besides Palestinian flags, the Egyptian flag to express their appreciation for the role which Egypt is playing in trying to heal the inter-Palestinian rift and reopen the Rafah border crossing. The protestors also called for the Rafah crossing to be placed under Egyptian-Palestinian supervision without the involvement of the occupation or the Europeans.

In a speech he delivered at the demonstration Dr. Sami Abu Zuhri, Hamas spokesman, said that his movement still rejects reviving the crossings agreement as called for by the Prime Minister of the Ramallah illegitimate government, Salam Fayad, and described such calls as irresponsible and reflect subservience to Zio-American dictates.

He also denied rumours that a group of Hamas armed men infiltrated into Egypt and were arrested by Egyptian security, saying that Egyptian National security concerns Hamas and the aim behind spreading such rumours was to spoil the good relationship that Hamas enjoys with Egypt at both the official and the popular levels.

Abu Zuhri stressed that his movement is still keen on talks with Fatah, adding that it has become clear to everyone who rejects dialogue."
Posted by Tony at 11:49 AM