Olmert: His Own Shlemiel, or Bush’s? 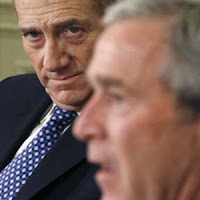 "While Israel’s Winograd Commission has pulled no punches in excoriating the Israeli military and political leadership for their botched war in Lebanon last summer, there appears to be a massive lacuna in its conclusions. Israel went to war in haste without a considered plan, without weighing alternatives, without establishing clear objectives and without an exit strategy. That much Winograd was prepared to say bluntly. But what he doesn’t explain is why.

And here, I think, he’s avoiding the elephant in the room: the very clear sense, throughout the Lebanon misadventure, that Israel was coordinating its actions with Washington to an extent that the Bush Administration’s own decisions had a decisive impact on how Israel waged its campaign......"
Posted by Tony at 5:01 AM