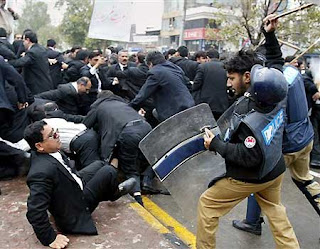 Where Were They When Musharraf Sacked the Judges?

".....What a pity that the paper of record did not lead a chorus of disapproval when Musharraf sacked all the independent-minded judges of the Supreme and High Courts in the country, or when lawyers were being bludgeoned into submission by the cops on the streets of every major Pakistani city. Neither the leaders of the US/EU combine or their media were too upset by that development. Ther judges, it was whispered, had become too proactive and were ordering the release of disappeared 'terrorists' who had been imprisoned without trial after ascertaining that there was no proof to detain them. This challenged the fundamentals of Guantanamo and the violation of civil liberties, the suspension of habeas corpus in Britain. Just like the Queen Bee and her drones, the politicians ordained and the global media networks and tame journos followed suit....."
Posted by Tony at 9:04 AM