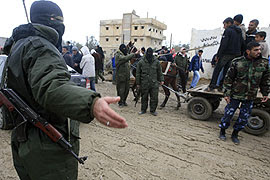 "Hamas has said that it must have a role in the control of the Rafah crossing between Egypt and Gaza, and that old arrangements are no longer valid.

That has caused rising tension between Hamas and Egypt, and little hopes for a breakthrough during crucial meetings on Wednesday.

Egyptian leaders will hold talks in Cairo on Wednesday with Mahmoud Abbas, the Palestinian president, as well as Hamas leaders.

Israel, on the other hand, says it will not oppose a deal that would see the Palestinian Authority (PA) of Abbas take control of Rafah, according to officials....

Sami Abu Zuhri, a Hamas spokesman, strongly criticised on Tuesday the idea of returning to the 2005 border arrangements.

He said the idea was "an international Israeli conspiracy, in which some regional elements and Ramallah [Fatah] are participating".....

Meanwhile, tensions along Gaza's frontier with Egypt flared again on Tuesday when Egyptian forces tried to prevent Palestinian vehicles from driving into Egypt.

Hamas fighters intervened, firing into the air to clear the way for the cars to pass.

They threatened to blast open new holes in the border if Egyptian forces refused to back down.

Egyptian forces strung barbed wire along some of the gaps between two gates leading into the Palestinian territory, while riot police were deployed on roads from Rafah to the border crossings.

A security force of around 20,000 has been deployed in north of the Sinai peninsula since Saturday, an Egyptian source told the AFP news agency."
Posted by Tony at 12:36 PM