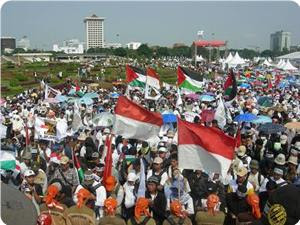 "JAKARTA, (PIC)-- Thousands of Islamic, European and Arab masses have demonstrated lately all over the world in solidarity with the besieged Palestinian people in Gaza and in condemnation of the Israeli siege and aggression against Palestinians as well as the US policy biased to Israeli occupation.

From the Monas plaza in central Jakarta, the Indonesian demonstrators headed towards the American Embassy as they were chanting slogans in solidarity with the citizens in Gaza and condemning the Israeli aggression on the Palestinians in the West Bank and Gaza as well as the US policies in support of Israel's crimes......

For his part, Tefatel Semarang, the leader of the Justice and Welfare party, strongly denounced the policy of double standards practiced by the American administration, in terms of its claims of fighting terrorism, while it continues to give support and backing for the most terrorist and racist regime in history.

Semarang underlined that the American administration contributes to the killing of an entire people through its encouragement to Israel to tighten the siege on the Palestinian people, only because they decided their choice democratically.....

In Sweden, sit-ins and marches in solidarity with the Palestinian people were held throughout the major Swedish cities including Stockholm and Uppsala to demand the lifting of the Israeli siege imposed on the Gaza people.

The protestors called during the solidarity events on their government, parliament, members of the European parliament and the EU to work seriously in order to stop the escalating "Zionist terrorism" practiced against the Palestinian people; in addition, the protestors handed concerned official parties in Sweden letters in this regard.

In the heart of the Austrian capital, Vienna, despite cold winds, more than 2,000 citizens went on a massive march to express their outrage at the suffocating Israeli siege imposed on the Gaza Strip.

In speeches, MPs and representatives of civil society in Austria along with resident Islamic and Palestinian institutions deplored the Zio-American policy of siege, where the speakers described the siege as "mass punishment" and an "inhuman practice" that turned the Gaza Strip into "the biggest prison in the world."

The Austrian demonstrators also chanted slogans greeting the step taken by Egypt to open the Rafah crossing before the Gaza people and urging the Egyptian leadership to uphold this step.

In the same context, hundreds of German masses rallied Sunday in Berlin to call for lifting the Israeli siege on the Gaza Strip as some of them were carrying banners warning of the dangerous policy of starvation and impoverishment exercised by the Israeli occupation against the Palestinian people.

In the Swiss city of Zurich, more than 2,000 people rallied Saturday evening to express their strong denunciation of the aggravated Israeli siege imposed on the Gaza Strip, calling on the Swiss parliament to condemn the aggressive Israeli massacres against the Palestinian people and the American bias in favor of Israel.

Dr. Basim Naim, the health minister in the PA caretaker government in Gaza, spoke in a telephone call to the Swiss demonstrators explaining the gravity of the humanitarian situation resulting from the unjust Israeli siege.

In front of the residence of British premier Gordon Brown at 10 Downing Street, more than 2,500 people gathered to call for lifting the Israeli siege imposed on Gaza.

The protestors were carrying Palestinian flags and banners denouncing the policy of siege imposed on the Palestinian people in Gaza Strip as some of them were holding dolls painted with red in symbolic reference to Palestinian children and infants who were killed by the Israeli occupation.

Many statements and appeals were issued throughout Europe that warned of the consequences of the European complicity in the Israeli policy of siege through turning a blind eye to this unjust policy and called for tangible official European position pressuring Israel to lift immediately the siege on the Gaza people.

In the context of a wide range of popular events organized in the Moroccan cities over the past few days, nearly 4,500 people demonstrated Sunday afternoon in Rabat against the suffocating siege imposed on the Gaza Strip and in solidarity with the Palestinian people."
Posted by Tony at 4:56 AM