Why the Afghan Taleban feel confident 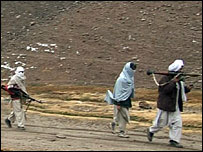 "In Afghanistan, the Taleban now claim to have influence across most of the country and have extended their area of control from their traditional heartland in the south.

They are able to operate freely even in Wardak Province, neighbouring the capital Kabul, as a BBC camera crew who filmed them recently found.

One of their commanders in Wardak, Mullah Hakmatullah, said they do not control the roads nor the towns, but they hold the countryside and have increasing support because of the corruption of the administration.....

The Taleban group showed off weapons, including a heavy machine gun they said they had captured from government forces.

They test-fired them in broad daylight, apparently not fearing retaliation from government nor international forces.

They were armed with AK-47s and rocket-propelled grenade launchers.

Nearby the burnt-out wreck of a government vehicle was left from a recent confrontation with Afghan national forces......"
Posted by Tony at 7:02 AM