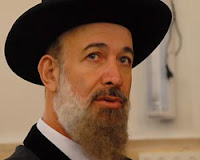 "Ashkenazi Chief Rabbi Yona Metzger has been quoted as calling for Gazans to be transferred to the Sinai Peninsula, to a Palestinian state which he said could be constructed for them in the desert.

In an interview in English with the British weekly The Jewish News, the chief rabbi also said that while peaceable Muslims should be allowed to pray in Jeruasalem mosques, they should recognize that Jerusalem belongs to the Jews. Muslims have Mecca and Medina, he was quoted as saying, adding that "you don't need a third place."

Metzger called for Britain, the European Union and the United States to assist in the construction of a Palestinian state in Egypt's Sinai Desert...."
Posted by Tony at 7:24 AM