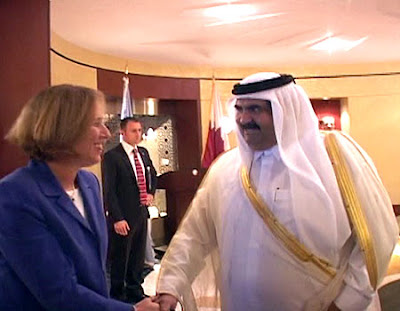 "Defense Minister Ehud Barak met with Qatari Prime Minister Sheikh Abdullah bin Khalifa al-Thani almost a week and a half ago in Switzerland, at the Davos Economic Forum. The existence of the surreptitious talks has so far been kept under-wraps by Israel.

During the half-hour meeting the two discussed the current situation between Israel and Hamas, which enjoys excellent relations with the Gulf Emirates. Also on the agenda was the ongoing economic siege imposed on Hamas-ruled Gaza, the breach of the Rafah border crossing and Qatari efforts to advance negotiations for the release of Israeli soldier Gilad Shalit......

Alongside Barak's momentous encounter, Palestinian sources have told Ynet that a senior figure from Qatar paid a visit to Israel two weeks ago and met with Israeli leaders to discuss the situation in Gaza and the possibility of jumpstarting stagnant negotiations over the release of Shalit.

The sources said that the Qatari representative proposed an agreement which would entail Israel rescinding its decision to cut back on its supply of diesel fuel to Gaza and allow the entry of humanitarian aid to the Strip. In exchange the Palestinians would cease the incessant rocket fire on Israel's south and Qatar would vow to try and reinstate the calm between Israel and the Palestinian parties....."
Posted by Tony at 7:44 PM