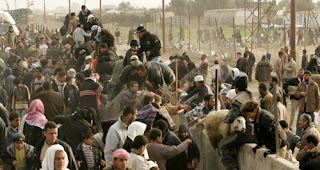 The mass jailbreak of Gazans into Egypt revealed the bankruptcy of both Israel's policy of collective punishment and Bush's attempt to make Mideast peace.

"......The Rafah breakout shows the limits of Washington's policy of trying to cajole and bully "moderate" Arab regimes into doing our bidding. Right-wing commentators are fond of disparaging the "Arab street," but people power, it turns out, can still make a decisive difference in the Middle East. When popular outrage gets too great, even bought-and-paid-for despots like Mubarak have to yield to it. The situation closely parallels what happened during the 2006 Israel-Lebanon war, when Israel tried to bomb the Lebanese into overthrowing Hezbollah. The moderate Sunni regimes initially condemned Hezbollah but were forced by public outrage to reverse course, just as Mubarak was......."
Posted by Tony at 5:41 AM