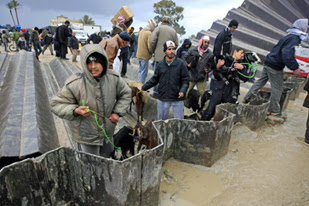 "Hamas will work with Cairo to gradually seal the Rafah crossing, Mahmoud al-Zahar, a senior Hamas leader has said after talks with Egyptian officials.

Al-Zahar told reporters on Saturday that his delegation and the Egyptians had overcome many obstacles and agreed on solving the problem of the crossing, but did not provide further details.

"We have concluded an agreement between us and our brothers in Egypt to operate channels at the local level at the crossing and along the border and we will implement it tomorrow after we meet with the (Hamas-run) government," al-Zahar said.

"We will work towards sealing the border between us and Egypt…this has to be done gradually," al-Zahar said.

Since January 23 hundreds of thousands of Gazans have streamed across the Rafah crossing, the border between the Gaza Strip and Egypt.

The Rafah crossing has been open since Hamas fighters destroyed large sections of the barrier wall after nearly a week-long Israeli lockdown of the territory.

By Friday, Egypt had succeeded in halting all but pedestrian traffic, but Hamas fighters later dragged away metal barricades to allow a column of massive transport trucks to enter Egyptian Rafah.

"Egypt has confirmed that it will work to provide the Palestinian people with everything it needs... the trucks that carry food and medicine will be processed on the Egyptian side in a suitable way," al-Zahar said.

Hamas has demanded that the Rafah crossing be operated through a strictly Palestinian-Egyptian agreement.

It wants to replace a 2005 arrangement that involved European observers and Israeli electronic surveillance on the border....."
Posted by Tony at 7:50 AM